ULTRA-BLACK IS THE NEW BLACK

Scientists are setting dark traps from which light cannot escape, but nature already has built a few of her own.

On a laboratory bench at the National Institute of Standards and Technology was a square tray with two black disks inside, each about the width of the top of a Dixie cup. Both disks were undeniably black, yet they didn’t look quite the same.

Solomon Woods, 49, a trim, dark-haired, soft-spoken physicist, was about to demonstrate how different they were, and how serenely voracious a black could be.  “The human eye is extraordinarily sensitive to light,” Dr. Woods said. Throw a few dozen photons its way, a few dozen quantum-sized packets of light, and the eye can readily track them.

Dr. Woods pulled a laser pointer from his pocket. “This pointer,” he said, “puts out 100 trillion photons per second.” He switched on the laser and began slowly sweeping its bright beam across the surface of the tray.

On hitting the white background, the light bounced back almost unimpeded, as rude as a glaring headlight in a rearview mirror.  The beam moved to the first black disk, a rondel of engineered carbon now more than a decade old. The light dimmed significantly, as a sizable tranche of the incident photons were absorbed by the black pigment, yet the glow remained surprisingly strong.

Finally, Dr. Woods trained his pointer on the second black disk, and suddenly the laser’s brilliant beam, its brash photonic probe, simply — disappeared. Trillions of light particles were striking the black disk, and virtually none were winking back up again. It was like watching a circus performer swallow a sword, or a husband “share” your plate of French fries: Hey, where did it all go?

N.I.S.T. disk number two was an example of advanced ultra-black technology: elaborately engineered arrays of tiny carbon cylinders, or nanotubes, designed to capture and muzzle any light they encounter. Blacker is the new black, and researchers here and abroad are working to create ever more efficient light traps, which means fabricating materials that look ever darker, ever flatter, ever more ripped from the void. 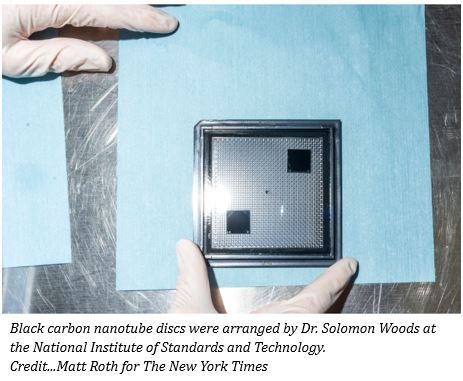 The N.I.S.T. ultra-black absorbs at least 99.99 percent of the light that stumbles into its nanotube forest. But scientists at the Massachusetts Institute of Technology reported in September the creation of a carbon nanotube coating that they claim captures better than 99.995 of the incident light.

“The blackest black should be a constantly improving number,” said Brian Wardle, a professor of aeronautics and astronautics and an author on the new report. “Folks will find other materials that are blacker than ours.”

It’s not a mere ego-driven dance of the decimal point. The more fastidious and reliable the ultra-black, the more broadly useful it will prove to be — in solar power generators, radiometers, industrial baffles and telescopes primed to detect the faintest light fluxes as a distant planet traverses the face of its star.

The Color of Cleverness and Rage 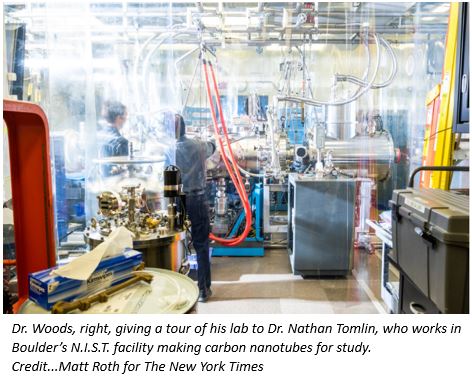 Blacker beauties canter through the natural world, too. Biologists lately have identified cases of superblack coloration in birds, spiders and vipers that go far beyond the standard melanin-based pigments of a crow’s plumage or a black cat’s fur, and vie with lab-grown carbon nanotubes in their structural complexity and power to conquer light.

Psychologists have gathered evidence that black is among the most metaphorically loaded of all colors, and that we absorb our often-contradictory impressions about black at a young age.

Reporting earlier this year in the Quarterly Journal of Experimental Psychology, Robin Kramer and Joanne Prior of the University of Lincoln in the United Kingdom compared color associations in a group of 104 children, aged 5 to 10, with those of 100 university students.

The researchers showed subjects drawings in which a lineup of six otherwise identical images differed only in some aspect of color. The T-shirt of a boy taking a test, for example, was switched from black to blue to green to red to white to yellow. The same for a businessman’s necktie, a schoolgirl’s dress, a dog’s collar, a boxer’s gloves.

Participants were asked to link images with traits. Which boy was likeliest to cheat on the test? Which man was likely to be in charge at work? Which girl was the smartest in her class, which dog the scariest?

The contrariness of black has long been expressed in our clothing. As the color best able to hide stains and dirt, black was the color of the laboring classes, and of the pious: people who sought to signal their disinterest in personal vanity and worldly affairs.  “Black was the color of modesty,” said Steven Bleicher, author of “Contemporary Color: Theory and Use,” and a professor of visual arts at Coastal Carolina University. “You still see that today across cultures, in Hasidic Judaism, where people wear all black, or the Amish.” 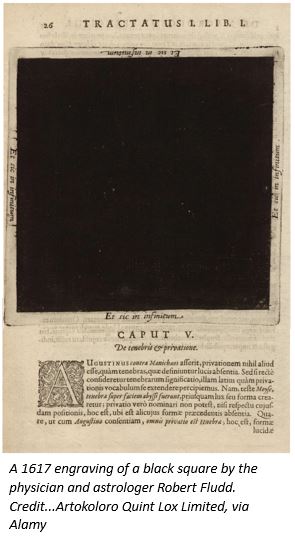 Black took on an air of cultured urbanity beginning in the Renaissance, when so-called sumptuary laws limited the wearing of rich colors like red and purple to the aristocracy. Newly prosperous merchants, lawyers, scholars and other professionals responded by donning luxurious black outfits of velvet, silk and fine wool, which also proved ideal for the display of gold accessories and brocade. Before long, aristocrats were wild for black clothing, too.  As clothes lost their drapiness and began hugging the body, people discovered another benefit of black. “It’s slimming,” Mr. Bleicher said. “And so, we have the little black dress.” Not to mention James Bond’s Euro-cut black tuxedo and Peter Fonda’s black leather pants.

For artists, black is basal and nonnegotiable, the source of shadow, line, volume, perspective and mood. “There is a black which is old and a black which is fresh,” Ad Reinhardt, the abstract expressionist artist, said. “Lustrous black and dull black, black in sunlight and black in shadow.”

So essential is black to any aesthetic act that, as David Scott Kastan and Stephen Farthing describe in their scholarly yet highly entertaining book, “On Color,” modern artists have long squabbled over who pioneered the ultimate visual distillation: the all-black painting.

Was it the Russian Constructivist Aleksandr Rodchenko, who in 1918 created a series of eight seemingly all-black canvases? No, insisted the American artist Barnett Newman: Those works were very dark brown, not black. He, Mr. Newman, deserved credit for his 1949 opus, “Abraham,” which in 1966 he described as “the first and still the only black painting in history.” 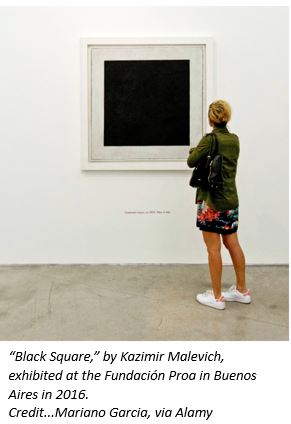 But what about Kazimir Malevich’s “Black Square” of 1915? True, it was a black square against a white background, but the black part was the point. Then again, the English polymath Robert Fludd had engraved a black square in a white border back in 1617.

Clearly, said Alfred H. Barr, Jr., the first director of the Museum of Modern Art, “Each generation must paint its own black square.”

Or its own superblack polyhedron. Artists today are experimenting with the new carbon nanotube coatings, to plumb such evergreen themes as the nature of light, absence, perception, deception and jewelry.

Diemut Strebe, an artist in residence at M.I.T., collaborated with Dr. Wardle on a project that would merge carbon at its most absorptive configuration, in the form of carbon nanotubes, with carbon in its most reflective and refractive state, as a diamond. How about if we smother a diamond in a layer of ultra-black carbon nanotubes, Ms. Strebe suggested, and watch its facets disappear?

“It was an exploration of a Heraclitean principle,” Ms. Strebe said. “The extreme opposites of how carbon behaves on exposure to light.”

One of their biggest challenges: finding a jeweler willing to lend them a chunky diamond that would be plastered with what amounts to high-tech soot.

“I tried many companies, Tiffany, others,” Ms. Strebe said. “I got many nos.” 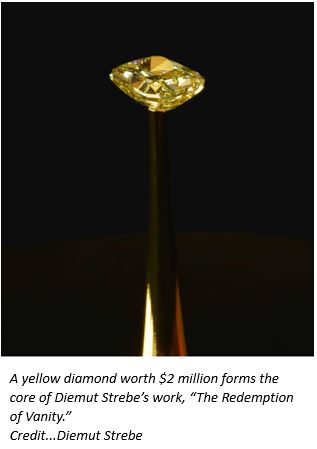 Finally, L.J. West Diamonds, which specializes in colored diamonds, agreed to hand over a $2 million, 16.78-carat yellow diamond, provided the process could be reverse-engineered and the carbon nanotube coating safely removed.

The resulting blackened bling is on view at the New York Stock Exchange, which Ms. Strebe calls “the holy grail of valuation.”

The key to true ultra-blackness is creating a material that absorbs light across the electromagnetic spectrum — not just visible light, but out to the far infrared, too.

To manage the task, explained John Lehman, an applied physicist and master ultra-black-smith at N.I.S.T.’s campus in Boulder, Colo., you take a carbon source like graphite and a metal like iron or nickel to serve as template and catalyst, and you cook them together in an oxygen-free setting to a temperature of about 1,400 degrees Fahrenheit.

As the graphite heats up, it saturates the ring-like structure of the metal and starts 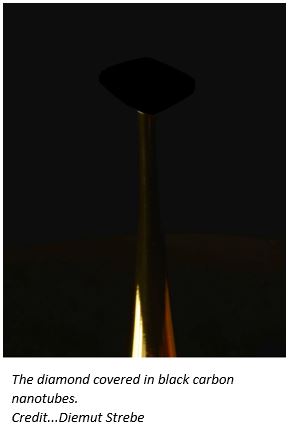 to push upward into a vertical array of hollow cylinders, each some billionth of an inch thick — the carbon nanotubes.

The final height, density and distribution of those nanotube trees in your nanotube bosk will determine how effectively your material can imprison photons and incorporate their energy into its constituent parts, and hence how extravagantly black it will appear.

“We start with the intrinsic properties of graphite, which already is pretty black,” Dr. Lehman said. “Then we essentially make a lot of little cavities for the light to bounce around in so the photons have a chance to be absorbed by the graphite.”

A similar interplay between chemistry and physics explains the newly discovered ultra-blacks in nature.

As Dakota McCoy of Harvard University and her colleagues have reported in Nature Communications and the Royal Society Proceedings B, the feathers of some species of birds-of-paradise and the decorative patches on peacock spiders rival the luxurious blackness of a lab-grown carbon nanotube jacket, reflecting well under .5 percent of the light cast upon them.

The researchers determined that, in addition to being flush with the dark pigment melanin, the superblack

body parts in both the birds and the spiders had an unusual microstructure.

“If you’re a biologist, you know what a feather should look like,” said Ms. McCoy, who is completing her doctorate. But on examining a black feather from a bird-of-paradise under a microscope, “I almost fell out of my chair.”

Rather than lying in a flat, smooth plane, as normal feathers do, the dense, tiny branches of this feather curved upward by 30 degrees and were edged with spikes. That bristling structure, the researchers showed, created cavities of an ideal size and shape for trapping light.

The peacock spider, by contrast, builds its superblackness convexly. Cannily placed bumps on its cuticle channel incident light toward melanin-rich patches primed to absorb it.

In both birds and spiders, the animal superblacks seem to be part of a masculine ruse. The blacks are always next to bright colors: the vivid splashes of teal, yellow, lime-green, violet and electric blue that males must flaunt in their mating displays.

By aggressively absorbing light in the areas surrounding the colorful bits, the superblacks stanch the sort of visual cues the female might use to judge the relative brightness of the ambient light. Without such comparative information, the female can only conclude the male’s colors are better than brilliant: They’re lit from within. 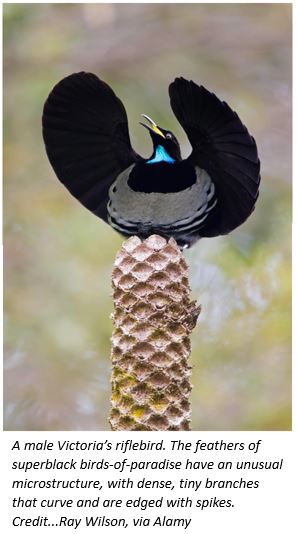 Natalie Angier became a columnist for Science Times in January 2007. She joined The Times in 1990, covering genetics, evolutionary biology, medicine and other subjects, and was awarded the 1991 Pulitzer Prize in Beat Reporting. 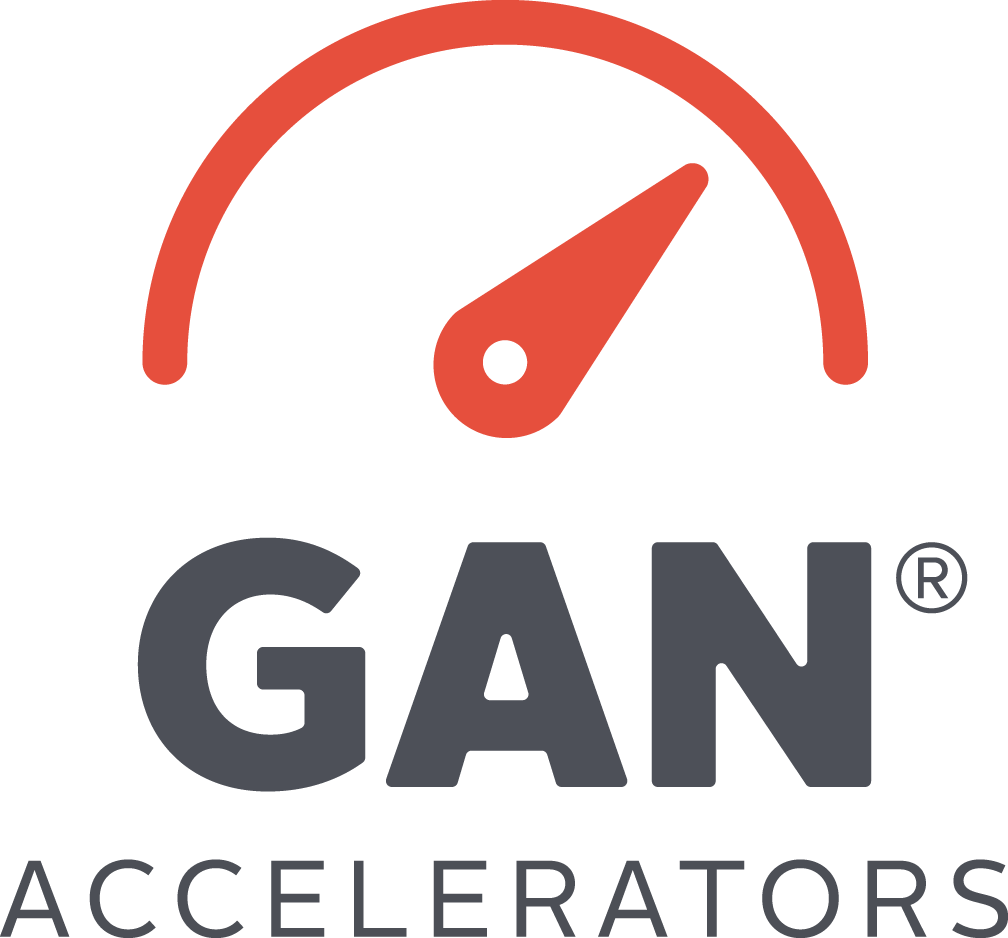